Anyone else out there find January and February to be kinda depressing months? The rain, the cold, the lack of sunshine, the holidays are over, just back to the daily grind… Ok, I’ll stop, I don’t want to induce depression if you aren’t already there. 😉

One of the bloggers I follow, Shay Shull, has this great idea she does in the fall — a scarf exchange with her girlfriends. I love this idea, you can read about it here! The basic premise is that they meet at a Starbucks, and everyone brings a wrapped scarf. They sip coffee, chit-chat, and do a traditional “white-elephant” type exchange. Again, simple, easy, and no one has to clean their house!

So a co-worker friend of mine and I decided to host a scarf exchange of our own to help beat the winter blues. We set the date, picked a local coffee spot, and decided to create invites to remember! Yes, that means I knitted mini-scarfs for each invite. Naturally.

Oh and BTW, we all had a great time!

You know that feeling when you find out you have been doing something completely wrong, for like years? Yup, that’s me.

A few of the women I work with started meeting during lunch to knit and crochet together. I was in the midst of a big knitting project and decided to join. Sat down, started confidently knitting, and one of the women told me she wanted to watch what I was doing. After observing me for a few minutes, she told me that, as it turns out, I knit backwards.

Earth shattering realization…I thought I knitted correctly. How could I have gone years and years doing it backwards. So I called my sister who knits a ton and I told her this harsh reality. She started laughing and said, “Yup, I know, when we learned to knit, we learned to knit the mirror image of how Mom knits.”

Ummm, someone could have told ME!!

Turns out, it really isn’t a big deal. I’m working on retraining myself the “proper” way to knit. Anyway, just goes to show, you don’t have to do it the “right” way to get things done!

Fast-forward to my most current knitting project. If you haven’t read through The Outlander series by Diana Gabaldon, I would recommend it!! I have several friends who have read the books and have really been enjoying the Starz TV show. As you can expect the costumes on the show are AMAZING!!! I would love love LOVE to wear some of the things the main character Claire wears.

Although we can’t all wear giant skirts and corsets in our daily lives, some of the knit wear she sports is totally in the realm of possibility. In particular the large cowl she wears just looks so cozy. Here’s what she looks like on the show… 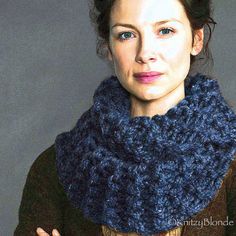 A little googling, and guess what, people have made patterns. I used the free one here. I’ve gone a little crazy and have now made three…

How to:
I truly followed the instructions in the pattern, the creator of the pattern did an awesome job.

I used the Long Tail Method to cast on, which I had never done before but found a few YouTube videos to help. Here is one I liked… I tried to make a video, but this is a much better explanation.

Again, she recommended a bind-off method I had never done, so here’s another great video. 🙂

And for the final product… 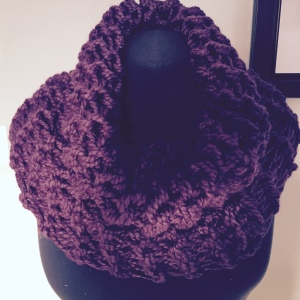 There are a couple fun ways to wear it (of course).
Around the neck.. 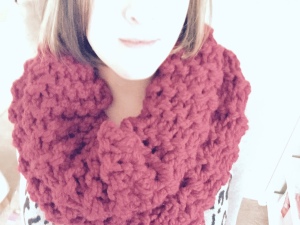 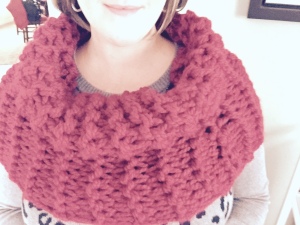 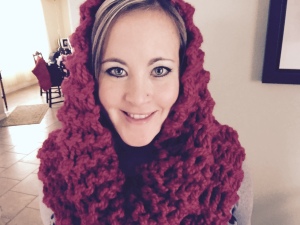 You can see why this would have been perfect for a Scottish winter in the 1700s, right?! Anyway, here’s the perfect winter knitting project, and hey, after you make it, curl up with the books (I just finished Book #3). 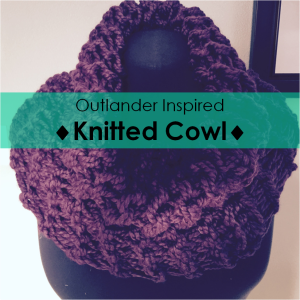